The Kan Extension Seminar II continues and this week, we discuss Jon Beck’s “Distributive Laws”, which was published in 1969 in the proceedings of the Seminar on Triples and Categorical Homology Theory, LNM vol 80. In the previous Kan seminar post, Evangelia described the relationship between Lawvere theories and finitary monads, along with two ways of combining them (the sum and tensor) that are very natural for Lawvere theories but less so for monads. Distributive laws give us a way of composing monads to get another monad, and are more natural from the monad point of view.

Before we dive into the paper, I would like to thank Emily Riehl, Alexander Campbell and Brendan Fong for allowing me to be a part of this seminar, and the other participants for their wonderful virtual company. I would also like to thank my advisor James Zhang and his group for their insightful and encouraging comments as I was preparing for this seminar.

First, some differences between this post and Beck’s paper:

The last two points have the advantage of making the resulting theory applicable to $2$-categories or bicategories other than $\mathbf{Cat}$, by replacing categories/ functors/ natural transformations with 0/1/2-cells. 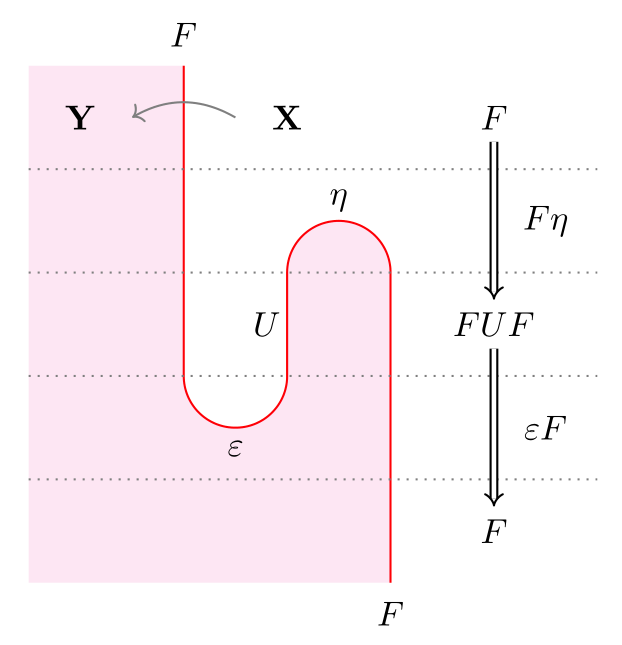 Most diagrams in this post will not be as meticulously labelled as the above. Unlabelled white regions will always stand for a fixed category $\mathbf{X}$. If $F \dashv U$, I’ll use the same colored string to denote them both, since they can be distinguished from their context: above, $F$ goes from a white to red region, whereas $U$ goes from red to white (remember to read from right to left!). The composite monad $UF$ (not shown above) would also be a string of the same color, going from a white region to a white region.

Example 1: Let $S$ be the free monoid monad and $T$ be the free abelian group monad over $\mathbf{Set}$. Then the elementary school fact that multiplication distributes over addition means we have a function $STX \to TSX$ for $X$ a set, sending $(a+b)(c+d)$, say, to $ac+ad+bc+bd$. Further, the composition of $T$ with $S$ is the free ring monad, $TS$.

In example 1, there is also a monoidal category in the background: the category $\left(\mathbf{End}(\mathbf{Set}), \circ, \text{Id}\right)$ of endofunctors on $\mathbf{Set}$. But this category is not braided – which is why we need distributive laws!

A distributive law of $S$ over $T$ is a natural transformation $\ell:ST \Rightarrow TS$, denoted 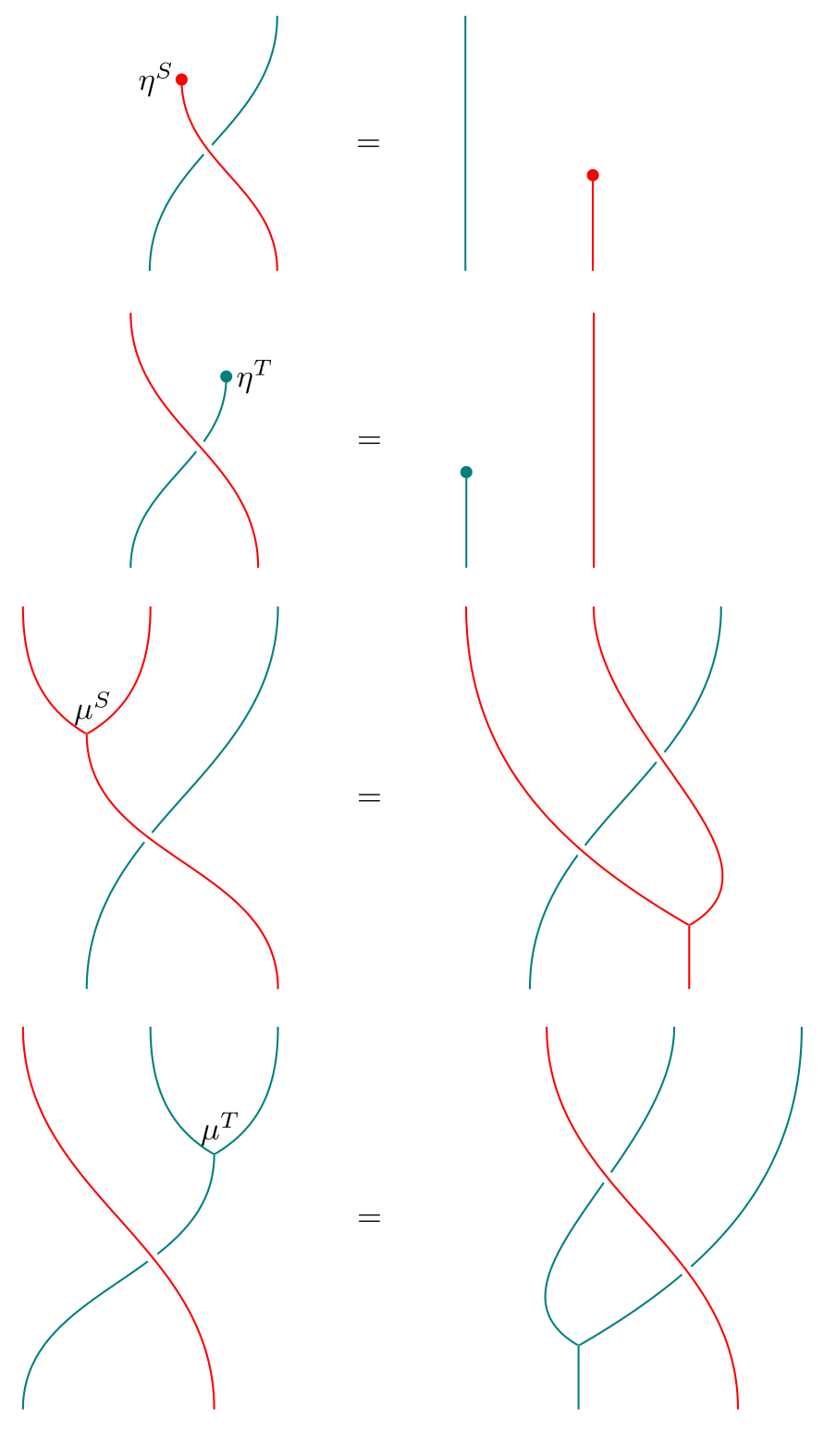 A distributive law looks somewhat like a braiding in a braided monoidal category. In fact, it is a local pre-braiding: “local” in the sense of being defined only for $S$ over $T$, and “pre” because it is not necessarily invertible.

As the above examples suggest, a distributive law allows us to define a multiplication $m:TSTS \Rightarrow TS$:

It is easy to check visually that this makes $TS$ a monad, with unit $\eta^T \eta^S$. For instance, the proof that $m$ is associative looks like this:

Asserting that $T \eta^S$ is a monad morphism is the same as asserting these two equalities: 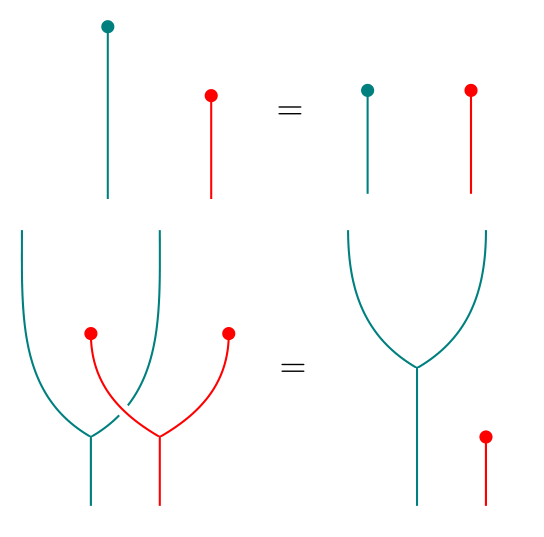 To get back the distributive law, we can simply plug the appropriate units at both ends of $m$:

This last procedure (plugging units at the ends) can be applied to any $m’:TSTS \Rightarrow TS$. It turns out that if $m’$ happens to satisfy all the previous properties as well, then we also get a distributive law. Further, the (distributive law $\to$ multiplication) and (multiplication $\to$ distributive law) constructions are mutually inverse: 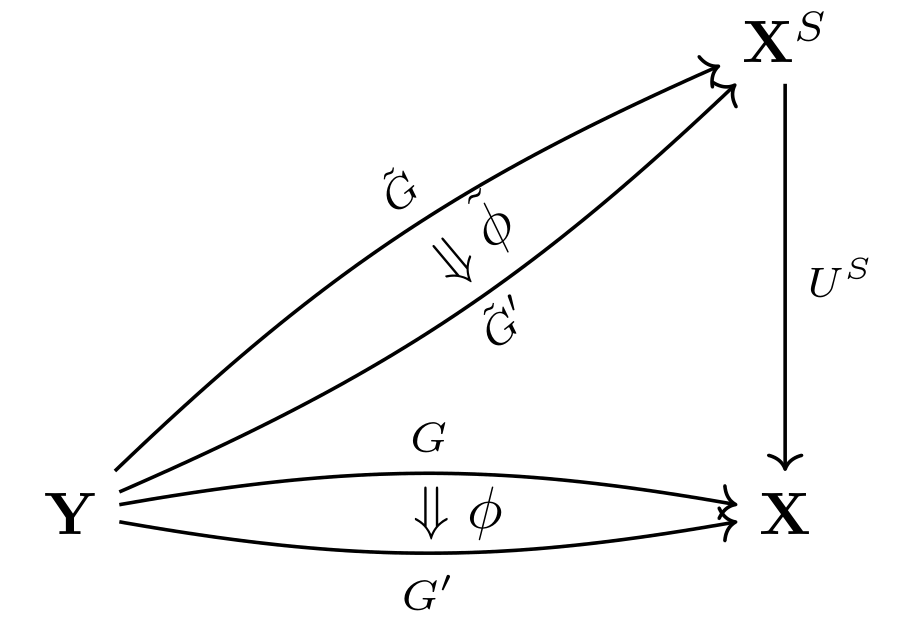 (Recall that the unlabelled white region is $\mathbf{X}$. In subsequent diagrams, we will leave the red region unlabelled as well, and this will always be $\mathbf{X}^S$. Similarly, teal regions will denote $\mathbf{X}^T$.)

Conversely, suppose we have a monad lift $\tilde{T}$ of $T$. Then the equality $U^S \tilde{T} = T U^S$ can be expressed by saying that we have an invertible natural transformation $\chi: U^S \tilde{T} \Rightarrow TU^S$. Using $\chi$ and the unit and counit of the adjunction $F^S \dashv U^S$ that gives rise to $S$, we obtain a distributive law of $S$ over $T$:

The key steps in the proof that these constructions are mutually inverse are contained in the following two equalities: 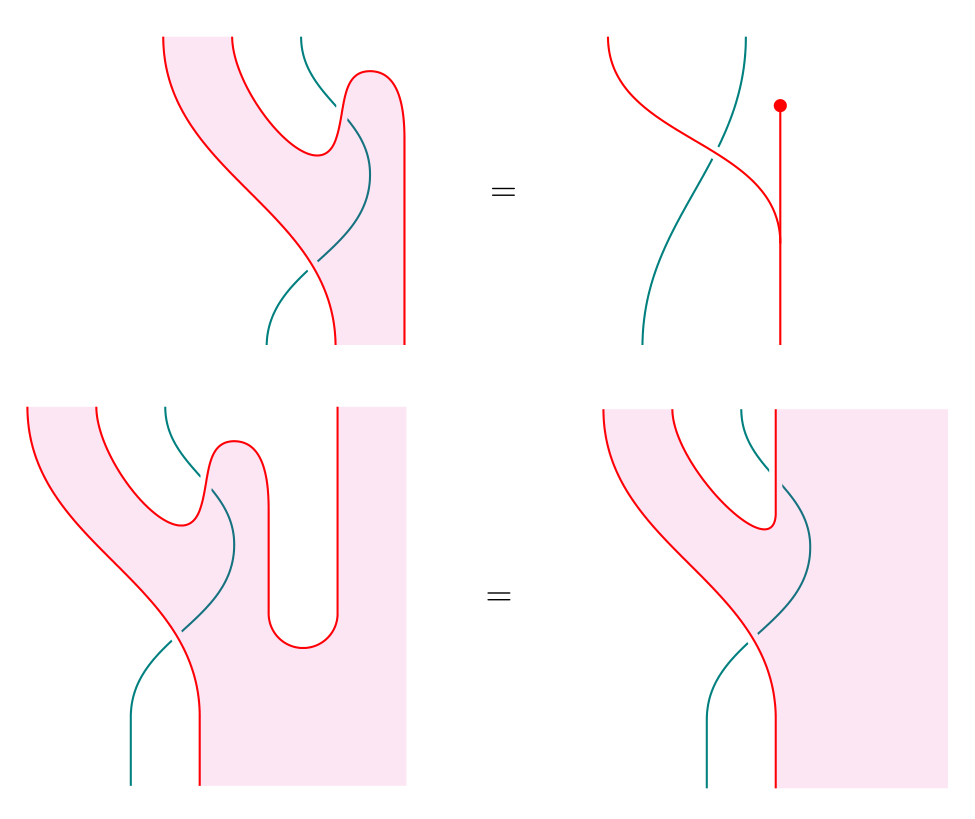 In fact, the converse construction did not rely on the universal property of $\mathbf{X}^S$, and hence applies to any adjunction giving rise to $S$ (with a suitable definition of a monad lift of $T$ in this situation). In particular, it applies to the Kleisli adjunction $F_S \dashv U_S$. Since the Kleisli category $\mathbf{X}_S$ is equivalent to the subcategory of free $S$-algebras (in the classical sense) in $\mathbf{X}^S$, this means that to get a distributive law of $S$ over $T$, it suffices to lift $T$ to a monad over just the free $S$-algebras! (Thanks to Jonathan Beardsley for pointing this out!) The resulting distributive law may be used to get another lift of $T$, but we should not expect this to be the same as the original lift unless the original lift was “monadic” to begin with, in the sense of being a lift to $\mathbf{X}^S$.

Algebras for the composite monad

After characterizing distributive laws, Beck characterizes the algebras for the composite monad $TS$. 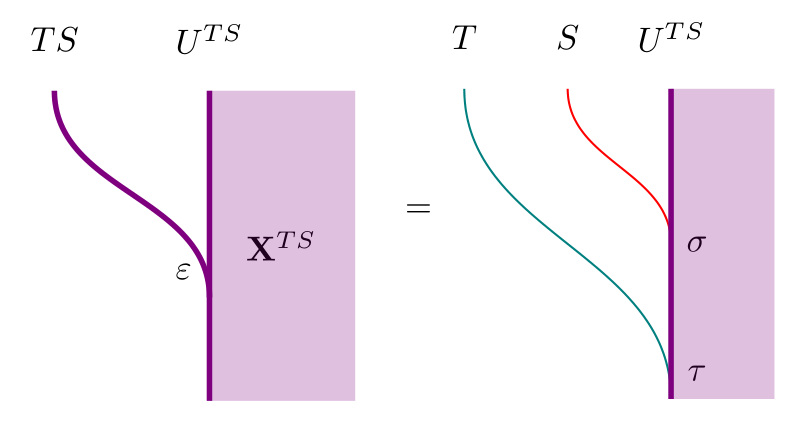 Further, $\sigma$ is distributes over $\tau$ in the following sense:

The properties of these actions allow us to characterize $TS$-algebras:

Theorem   The category of algebras for $TS$ coincides with that of $\tilde{T}$: 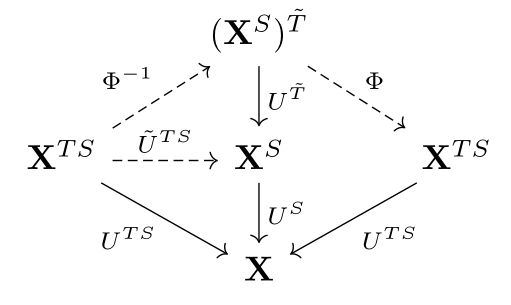 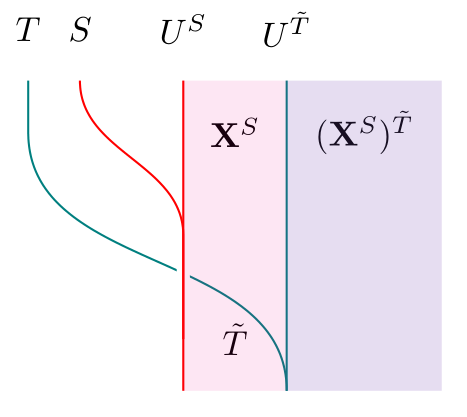 All that’s left to prove the theorem is to check that $\Phi$ and $\Phi^{-1}$ are inverses. In a similar fashion, we can prove the dual statement (again found in Cheng’s paper but not Beck’s):

Theorem   The Kleisli category of $TS$ coincides with that of $\tilde{S}$:

From now on, we identify $\mathbf{X}^{TS}$ with $(\mathbf{X}^S)^{\tilde{T}}$. Under this identification, it turns out that $\tilde{U}^{TS} \cong U^{\tilde{T}}$, and we obtain what Beck calls a distributive adjoint situation comprising 3 pairs of adjunctions: 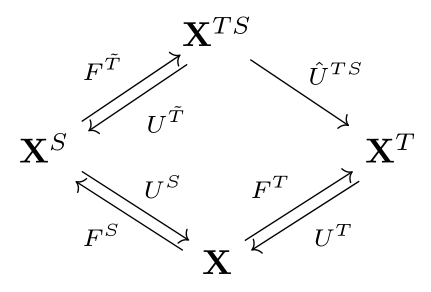 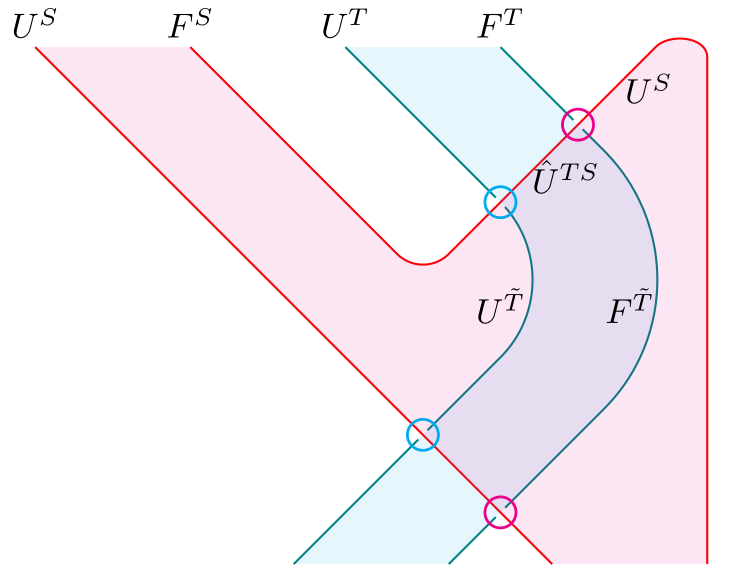 (Recall that colored regions are categories of algebras for the corresponding monads, and the cap and cup are the unit and counit of $F^S \dashv U^S$.)

This diagram is very similar to the diagram for getting a distributive law out of a lift $\tilde{T}$, and it is easy to believe that any such distributive adjoint situation (with 3 pairs of adjoints - not necessarily monadic - and the corresponding natural isomorphisms) leads to a distributive law.

In such a situation, we get an adjoint square consisting of 4 pairs of adjunctions. By drawing these 4 adjoints in the following manner, it becomes clear which natural transformations we require in order to get a distributive law: 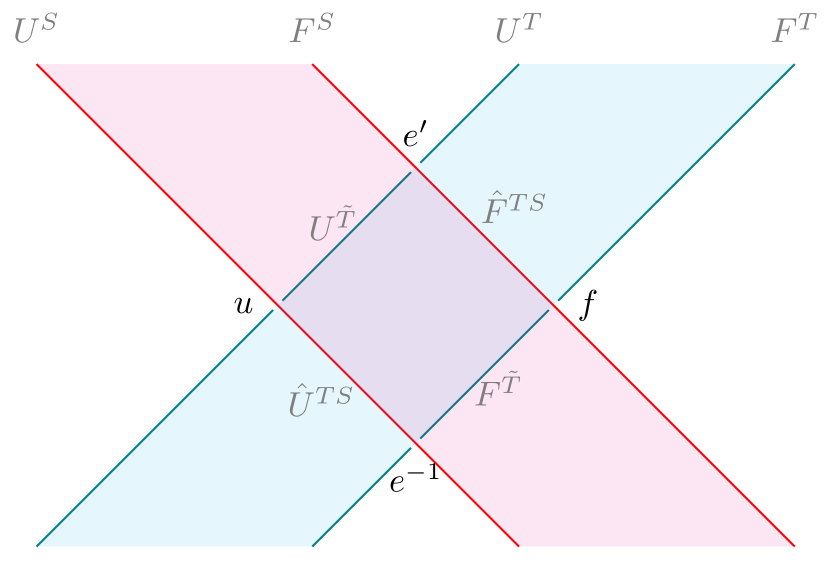 It turns out that given the natural transformation $u$ between the composite right adjoints $U^S U^{\tilde{T}}$ and $U^T \hat{U}^{TS}$, we can get the natural transformation $f$ as the mate of $u$ between the corresponding composite left adjoints $\hat{F}^{TS} F^T$ and $F^{\tilde{T}} F^S$. Note that $f$ is invertible if and only if $u$ is. We may use $u$ or $f$, along with the units and counits of the relevant adjunctions, to construct $e$:

But $e$ is in the wrong direction, so we have to further require that $e$ is invertible, to get $e^{-1}$. We get $e’$ from $u^{-1}$ or $f^{-1}$ in a similar manner. Since $e’$ will turn out to already be in the right direction, we will not require it to be invertible. Finally, given any 4 pairs of adjoints that look like the above, along with natural transformations $u,f,e,e’$ satisfying the above properties, we will get a distributive law!

Beck ends his paper with some examples, two of which I’ve already mentioned at the start of this post. During our discussion, there were some remarks on these and other examples, which I hope will be posted in the comments below. Instead of repeating those examples, I’d like to end by pointing to some related works: